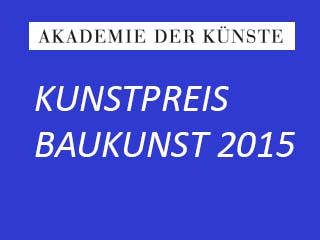 Achim Menges has received the KUNSTPREIS BAUKUNST 2015 (ART AWARD IN ARCHITECTURE) of the Akademie der Künste (Academy of Arts).

The Berlin Akademie der Künste, founded in 1696, is one of the oldest cultural institutes in Europe. The Academy’s Art Prizes in each of the six art sections represented in the Academy are awarded annually on 18th of March by the Mayor of Berlin on behalf of the Federal State of Berlin in remembrance of the 1848 revolution.